Bharatanatyam, an ancient form of Indian classical dance, originated in Tamil Nadu, the Southernmost part of India. Known for its distinctive hand gestures, eye movements, and beats of the feet, Bharatanatyam was originally performed by female dancers in Hindu temples, as an offering to please the resident temple deity. Many of the ancient sculptures in Hindu temples are based on Bharatanatyam dance postures.

Bharatanatyam comes from the words Bhava (Expression), Raga (Music), Tala (Rhythm) and Natya (Classic Indian Musical Theatre). It is said to be the embodiment of music in visual form, as a ceremony, or act of devotion. While there are five forms of dance, corresponding to the five elements, Bharata Natyam is a fire dance. One can take traditional Indian dance classes to learn this form of dance. 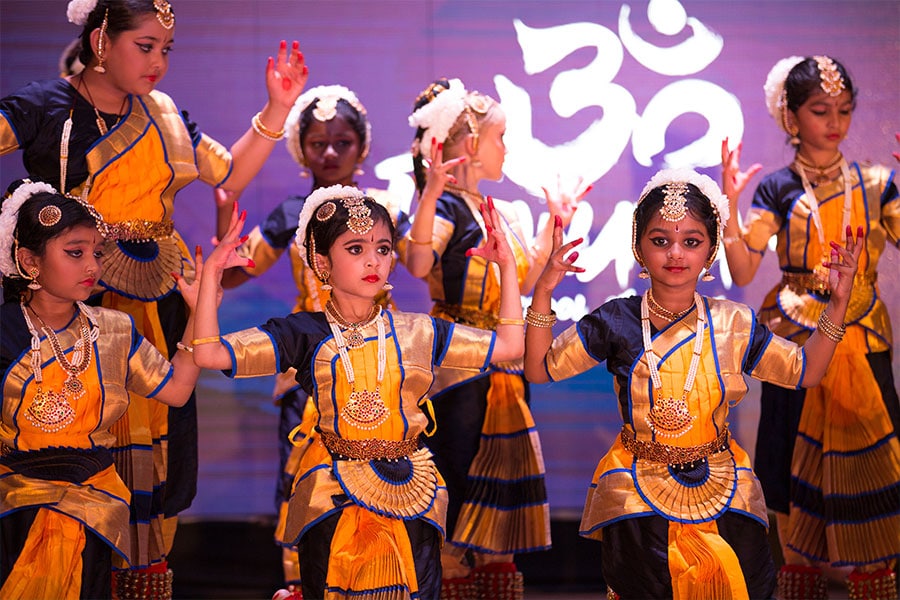 The dance itself is composed of three main elements: Nritta (rhythmic dance elements), Natya (mime or dance with a dramatic flair), and Nritya (a combination of the previous two). Graceful, feminine lines and flowing dance are balanced with masculine movements and stomping. Ancient texts and poetry describe the flourishing dance and music traditions of the time, which were intricately woven into the culture and religious practices.

They describe the ideal Bharata Natyam dancer as agile, slender, bold, skillful, hard-working, creative, and beautiful. She was usually a Devadasi, meaning a girl who was married to the temple or its deity. The dancers were quite skillful and highly respected. When Bharata Natyam is performed, a dancer is adorned with a special set of jewelry reserved for performances and ankle bells, floral hair decorations, and a unique, decorative costume that is meant to project the dancer’s essence.

The music is South Indian Carnatic style, performed with traditional South Indian instruments and the violin and flute. Today’s performances are performed outside of the temple, often onstage, with live accompaniment.